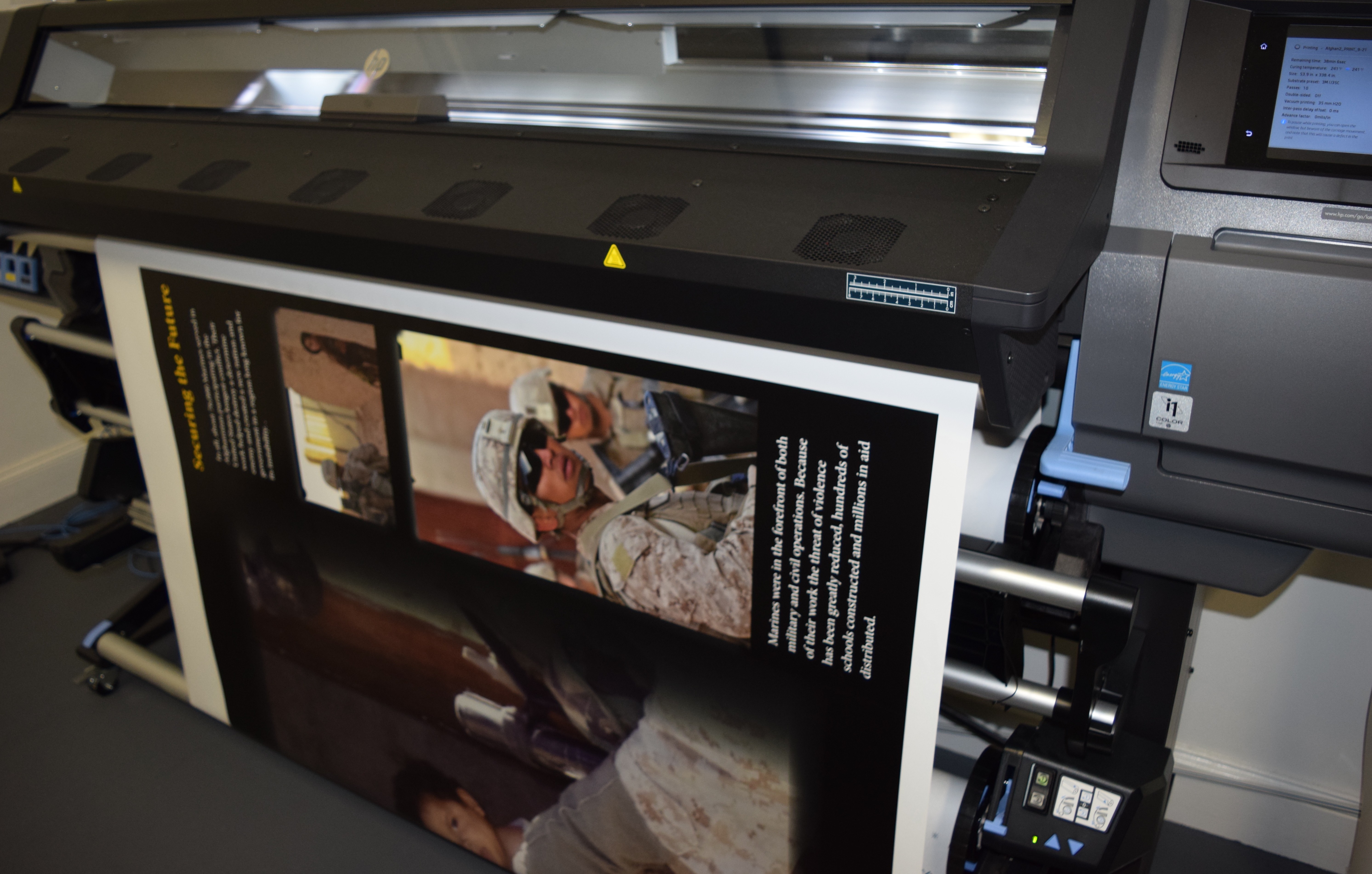 ARTWORK: Supplied by the client. 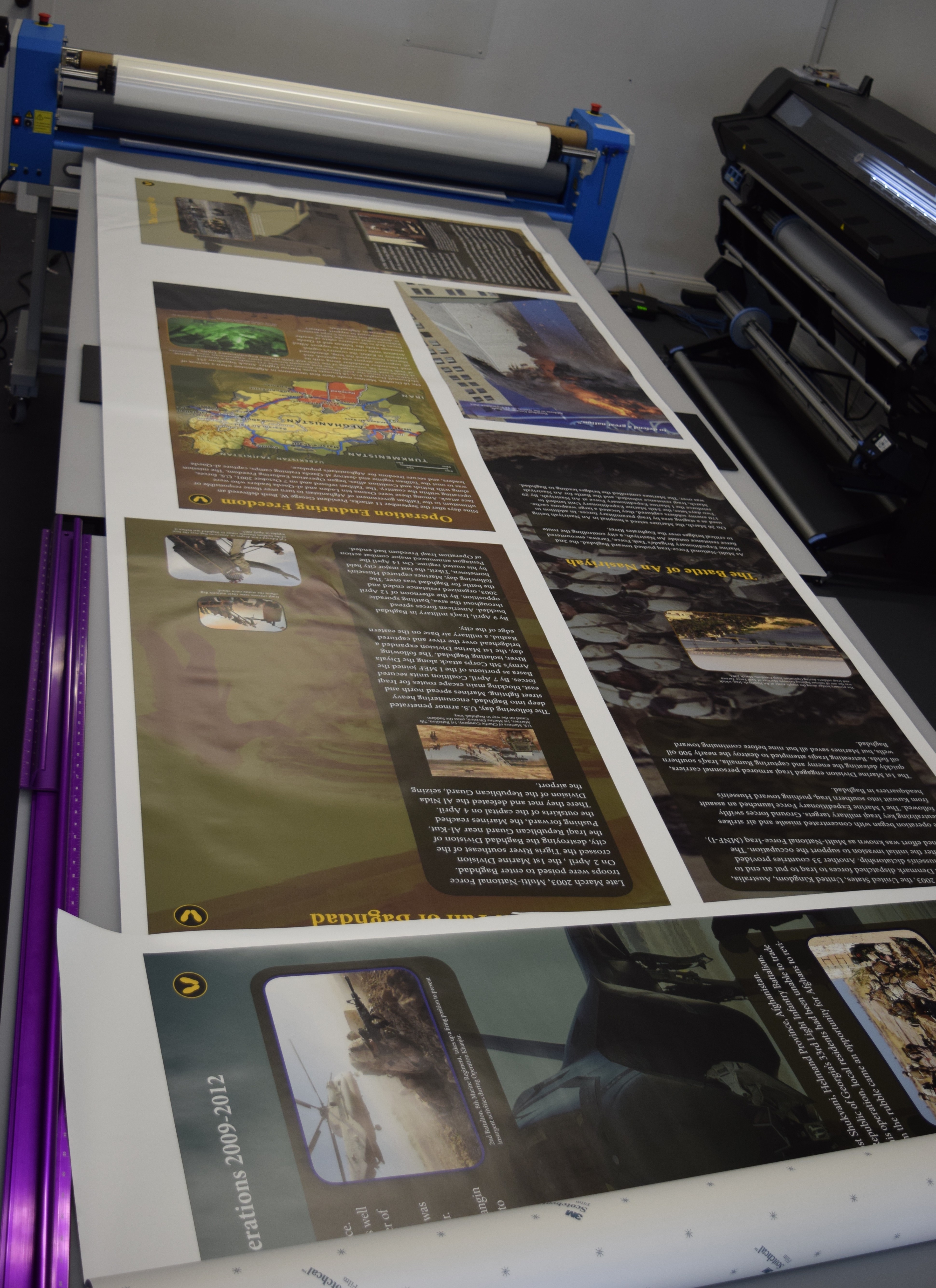 To reduce media waste, the images for panels were printed and laminated as a continuous sheet before being separated. 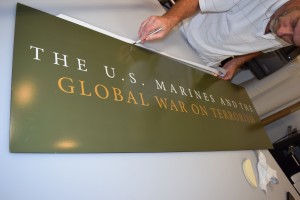 The excess vinyl is trimmed from the museum header panel. 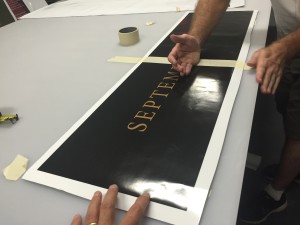 One of the smaller vinyl sheets is mounted to the PVC board. 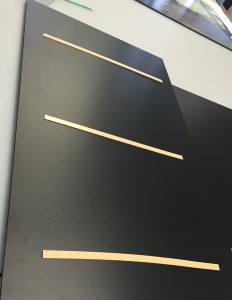 Double-sided tape was applied to the back of the panels for installation. 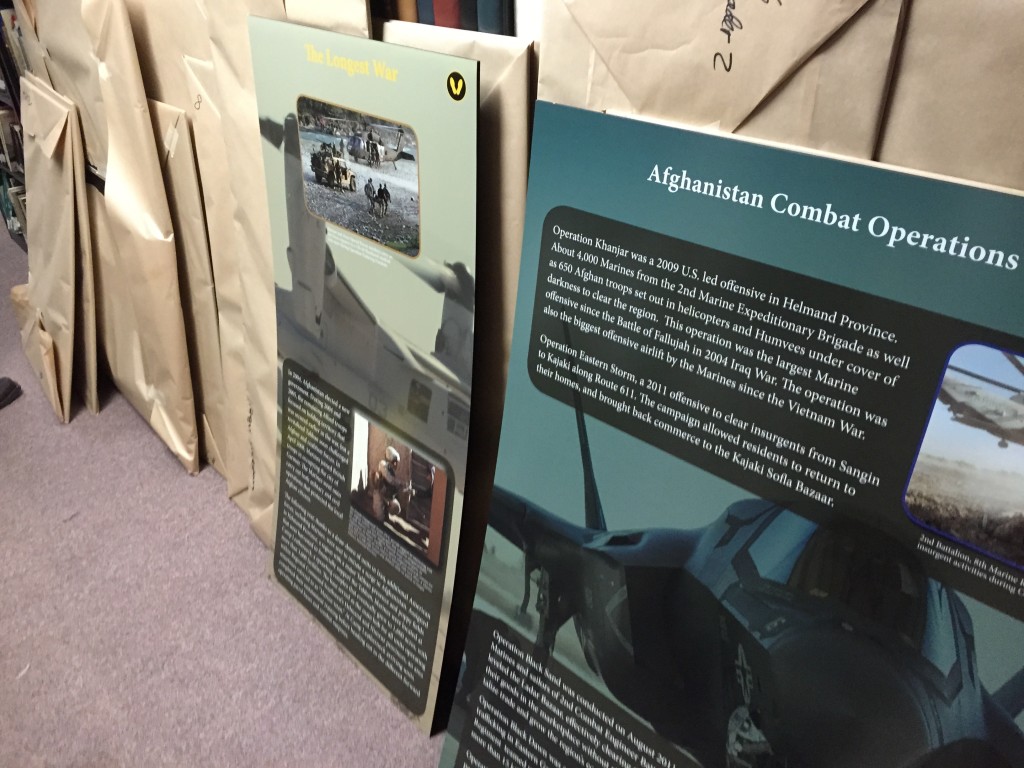 The museum panels are carefully wrapped to protect them from becoming damaged during shipping. 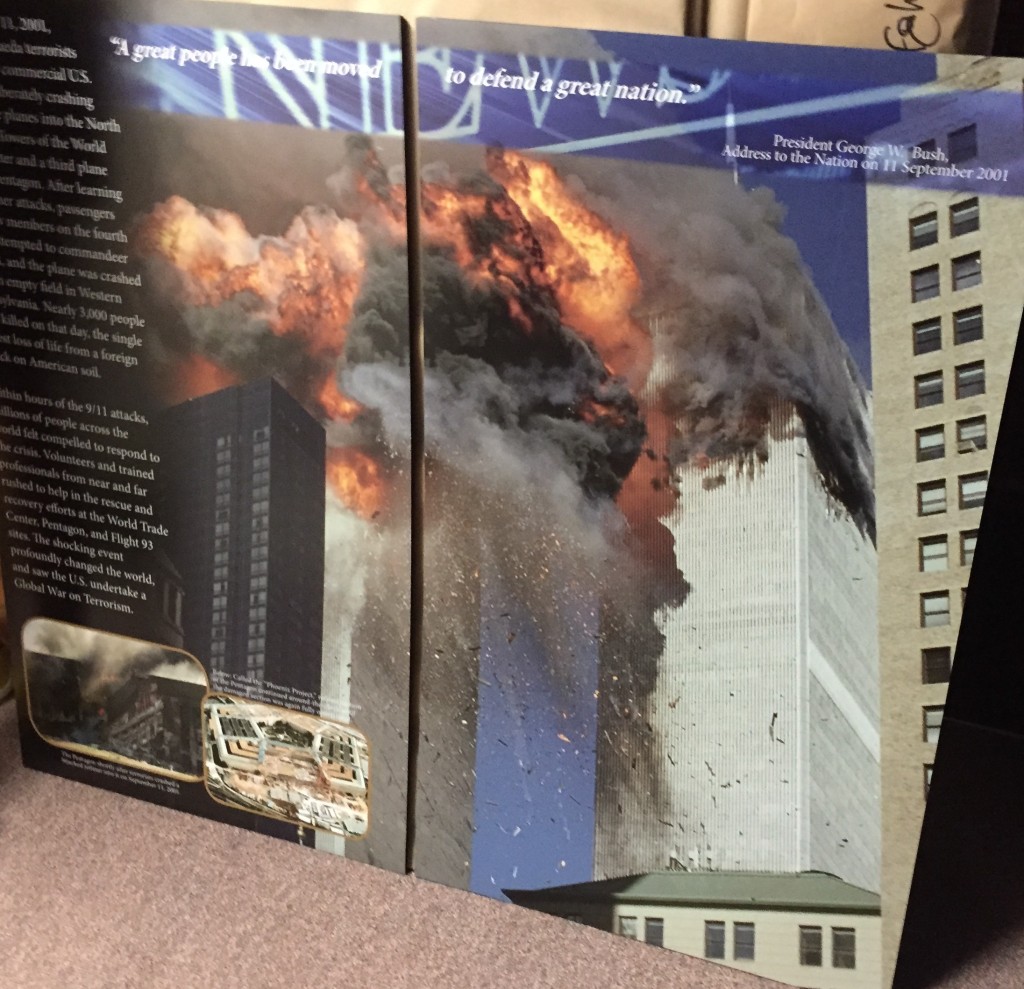 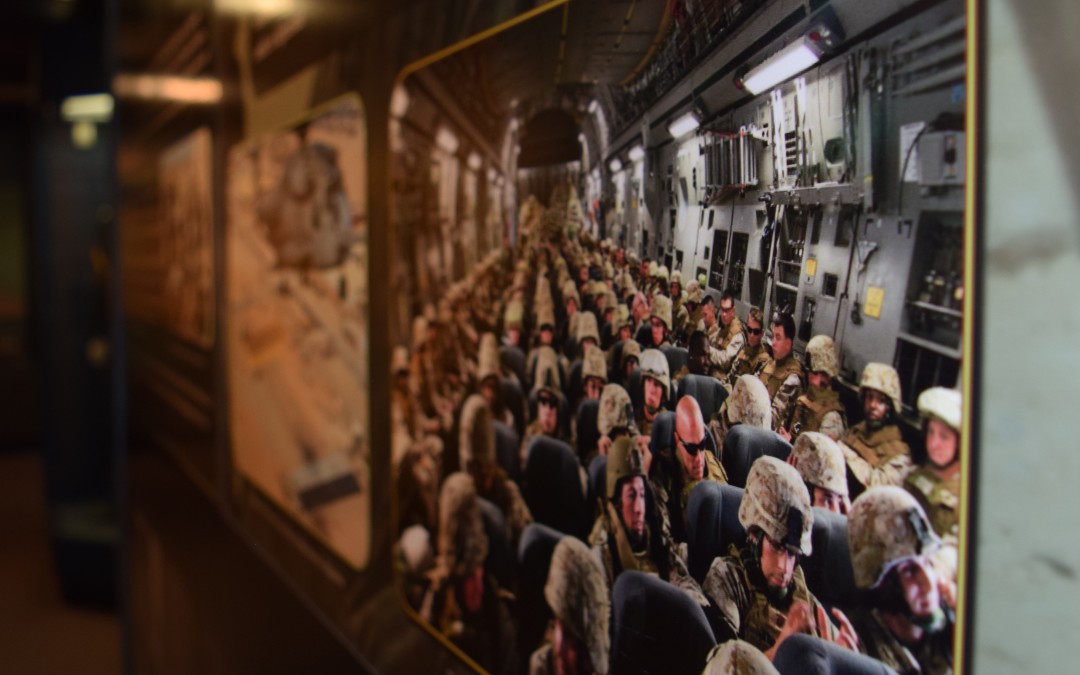 As part of the Parris Island Marine Corps Recruit Depot’s 100th anniversary celebration in mid-October, a retired Marine in uniform greeted visitors to the ribbon-cutting for the new exhibits at the Parris Island Museum with an enthusiastic “home of the best of the best.” He beamed with pride and dignity as he welcomed guests to learn more about the Corps culture and the role the museum plays in that culture.

The two new exhibits and an updated exhibit, which were unveiled at the ribbon-cutting ceremony, join other exhibit galleries in the 10,000-square foot museum detailing the history and traditions of the Marine Corps. The new exhibits include: the Making of a Marine, an exhibit that gives visitors a glimpse into the life of a recruit and the training process upon arrival at Parris Island with Yellow Footprints (the iconic first step toward becoming a Marine) to follow, a gas chamber, and rifle range; and The Drill Instructor, an exhibit that details the role of the DI through the different parts of training from receiving to combat conditioning, marksmanship and finally transformation into a Marine. The updated Global War on Terror exhibit features beams from the World Trade Center and large panels with engaging photographs and detailed descriptions of the Marines’ role in the GWOT. 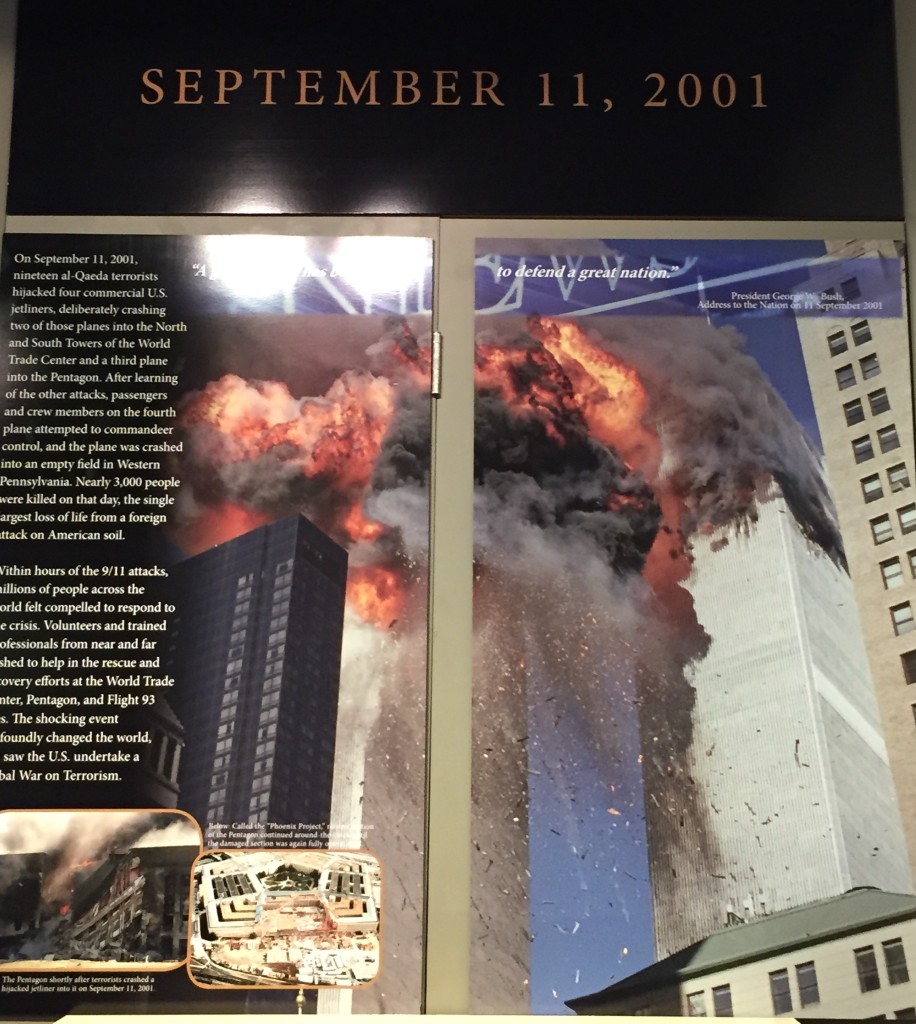 These two museum display panels in the Global War on Terror Exhibit show the Twin Towers on September 11, 2001. 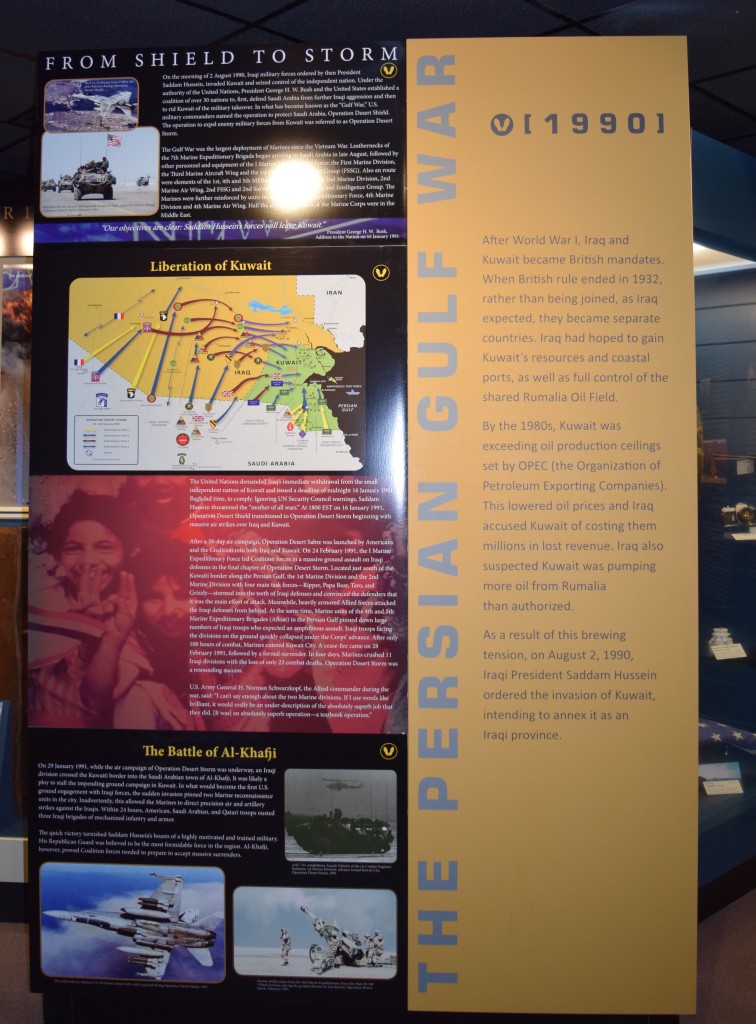 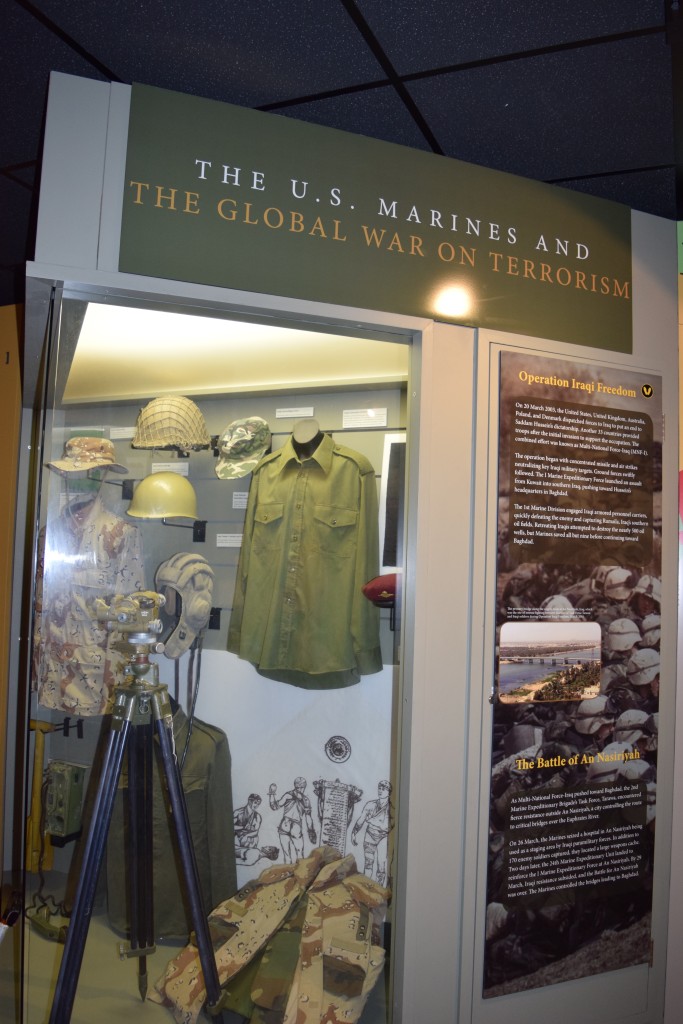 Interpretative display panels along with the Corps artifacts work together to educate visitors. 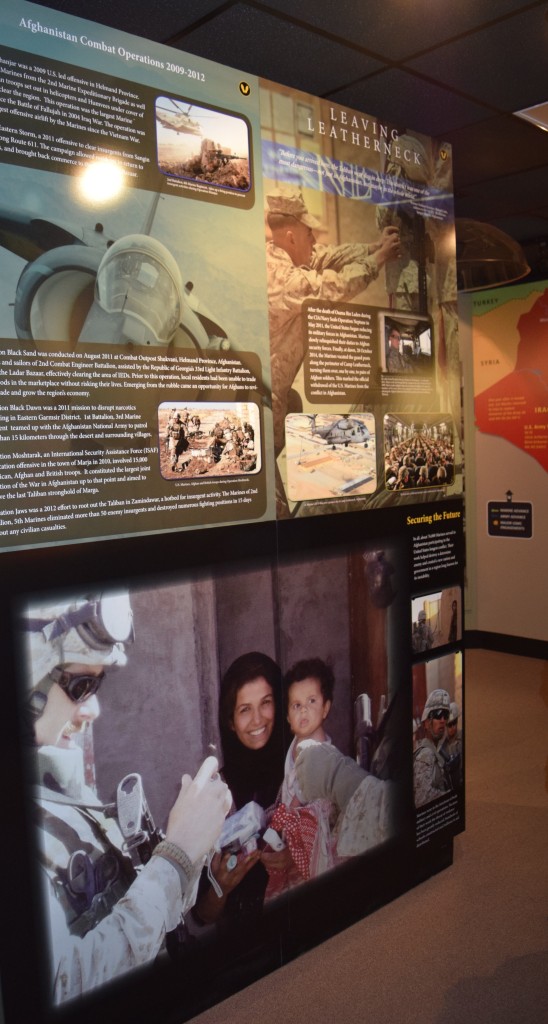 Fantastic photographs highlight the efforts of the Marines in the Global War on Terror exhibit.

The museum panels in the Global War on Terror exhibit depicts the Marine Corps vital role.

Along with these exhibits, the museum houses thousands of artifacts, images, and illustrations that trace the development of Parris Island into a Marine Corps installation. The museum dates back forty years to when it was dedicated in 1975. Since then, the museum has welcomed recruits, Marine families, veterans, and the general public.

The museum serves as an integral part of the recruits’ training. On Day 41 of their training they visit the museum to learn about the legacy of the Corps. The recruits and other visitors can gain inspiration from the stories told through artifacts and images of the Marines who served. 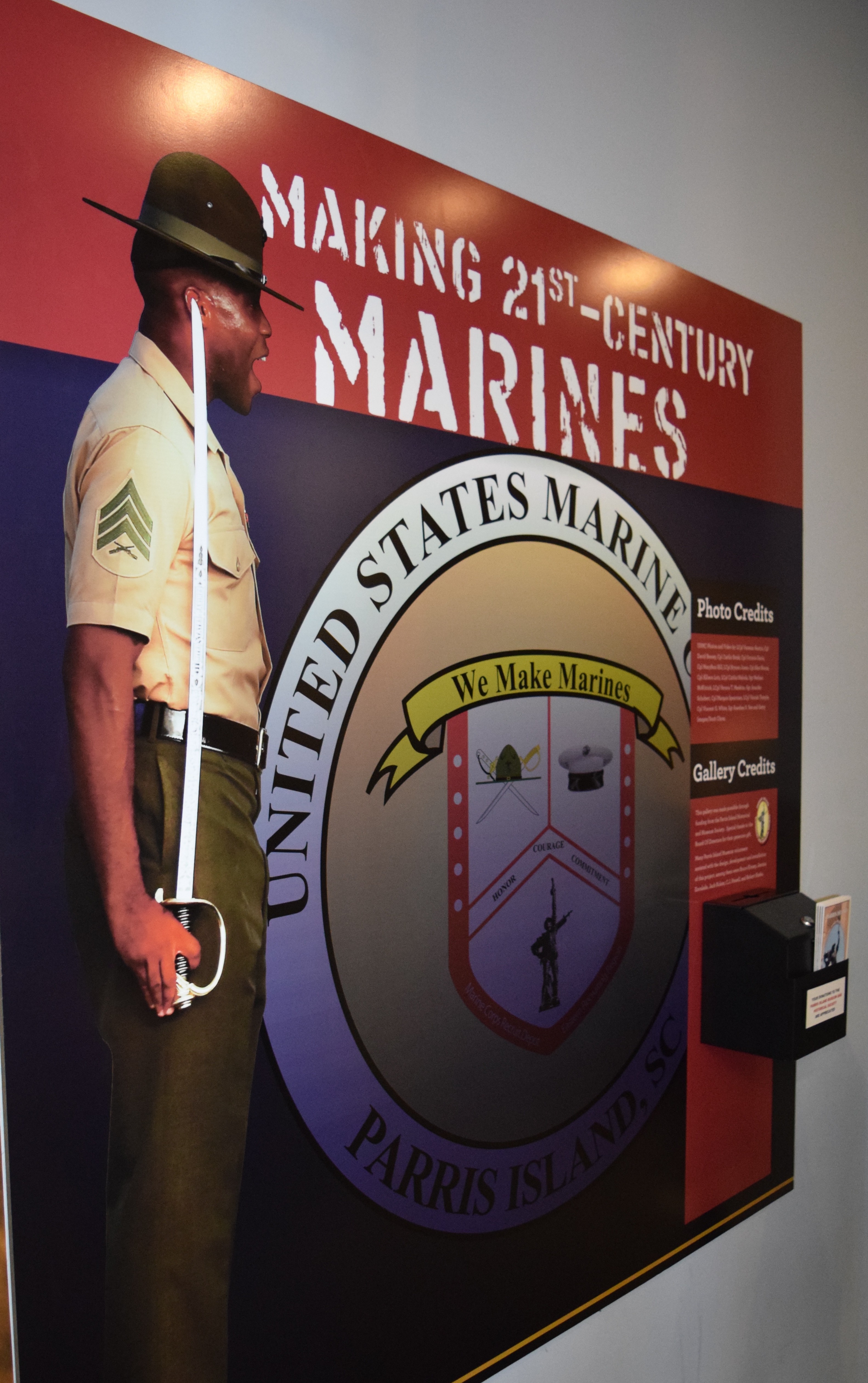 Drill Instructors, as pictured in the Making of a Marine Exhibit, play an intregal role in making Marines 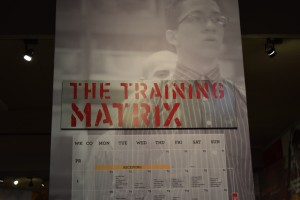 The Training Matrix is just a small part of the new Making of Marine Exhibit at the Parris Island Marine Corps Museum. 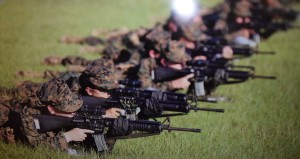 One of the areas in the Making of a Marine Exhibit features a rifle range. 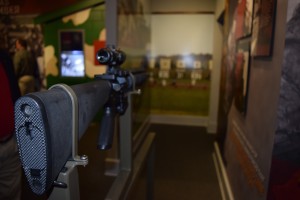 A corridor of the Making Marine Exhibit lets visitors take aim on the target range.

While working on the museum exhibit panels with Dr. Jeanne Encalade, a retired Marine, and Kim Zawacki, the curator, the staff at Printology experienced first-hand how the museum impacts visitors. During one visit, a retired Marine pointed out to his wife the exact location of where he served on a large map of the Operation Iraqi Freedom mission. He explained his unit’s role in the battle at that location. On other days working at the museum we overheard other Marines walking through the museum sharing their experiences. So we were, to say the least, honored to be a small part of this undertaking.

The museum serves as a reminder that those who served are among the best of the best—from the retired Marine greeting us at the ribbon-cutting ceremony to the Marine who showed his wife his battle location on the map, to the fresh-faced recruits in training getting a reprieve from physical training inside the museum.